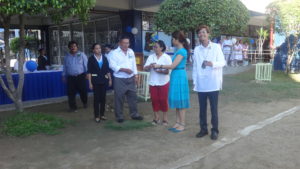 In our collective response to Pope Francis’ Encyclical for the Environment, the Laudato Si, particularly in mitigating climate change, and to highlight the celebration of the Philippine Environment Month and World Environment Day in June, the Environmental Management Bureau (EMB) 7 is initiating the 1st Eterni-Tree, an event which allows married couples to renew their vows to each other and to God, as well as to Mother Earth.

June, being also the month which is considered to be the most favorable time to marry, the event gathered thirty married couples who renewed their vows and planted trees on June 4, 2016 in University of Cebu Lapu-Lapu and Mandaue, Mandaue City, Cebu.